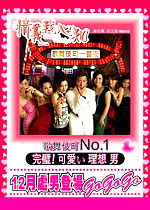 I wasnâ€™t aware that Leon Lai has this new show coming until I surf around HKMDB. Heheâ€¦ yeah.. itâ€™s my source of info what movie is up soon and from there.. Iâ€™ll search on google and learn more about the movies.

Guess whatâ€¦ haha, I guess this is the first time Brian join Gigi and me to watch a Hong Kong movie. Erm.. as far as I am concern, he never really like watching Hong Kong movies (in cinema). So yeahâ€¦ Leon Lai and Chapman To, please be honoured if you somehow, accidentally, unintentionally or whatever reason lead you to this site and saw this.

Moonlight in Tokyo, a storytelling started of by showing Leonâ€™s life. Yeah, he has this slight mental retarded problem. His parents has passed away and he is currently living with his brothers and sisters. His brothers and sisters were constantly arguing and their children were constantly crying because of his behaviour. And thus, the story begins.

*Itâ€™s quite cool how they related â€œThe Ugly Ducklingâ€ story to Leon Lai, since he is obviously the little ugly duckling, because he is different from his other brothers and sisters. Even better, they even related this whole â€œducklingâ€ thing to the swan ballet dancing.*

The movie seriously began when Chapman To was seriously in debt. He actually borrowed 1 million yen to buy some girls over to Japan to work as prostitute. The girls somehow ran away the day they touchdown. With the girl gone and a 1 million yen debt, Chapman has no choice but to be a thief.

So yeah, the world is so small, or maybe Japan isnâ€™t that big after all, Chapman To bump into Leon Lai (who was lost in Japan and is waiting for his brothers to look for him) while he was trying to steal his wallet. Leon caught Chapman trying to steal his wallet in this hilarious way. Chapman manages to free himself from Leon and happily thinks he stole his wallet only to find out it was empty after all. Yup, Leon is stupid but not dumb after all.

Leon then bump into Chapman again when Chapman was being beaten up by his loan sharks. Apparently, Chapman was Leonâ€™s primary school classmate. Leon then helped Chapman a lot that night. Yeah, he did hilarious stuff like singing songs and hugging *the song was simply hilarious*

, borrowed Chapman money, send him back to home and paid for the doctor who came over.

Leon then stayed over at Chapmanâ€™s place until Chapman have enough money to pay him back. One day, Chapman who constantly felt Leon being annoying and stupid finally notices Leonâ€™s potential. Yup, potential to be Japanâ€™s top gigolo. It is said that everyone who is unhappy will soon be happy when they hugged Leon. *mmmâ€¦ weird but cool*

. Chapman is soon busy training Leon to be a professional gigolo. As they stayed longer together, Chapman starts to concern more about Leon.

The suffering for them is over, Chapman finally became one of the influential people in the triad when his loan sharks was wanted by the police (you seriously gotta watch this part yourself. *roll on the floor laughing*). Just when everything seems like going on fine, Chapman finds out that eventually Leon was not being abandoned. He actually ran away from his family. I ainâ€™t telling a why but I can just sayâ€¦ it wasnâ€™t one of those happy ending you expect from a comedy movie.

Yes, I was rather surprise how this movie was being ended. Opssâ€¦ I spoil the fun.. but I just canâ€™t zip my mouth. I was shocked, amazed and speechless when I saw the ending. I was totally amazed when I think back, no one in this movie actually knows what is Chapmanâ€™s character name. As far as I can remember, I only hear people calling him â€œBig Brotherâ€ (I’ll have to re-watch to confirm this because at the sites he is being noted as HOI).

Itâ€™s a seriously out of my expectation type of comedy ending and I felt Leon really did bring to live his character. I think this character fits him perfectly. Being a little bit mentally retarded person suits him as people will tend to notice less of his sorta â€œwoodenâ€ acting skills. I mean, well itâ€™s a good thing.

Some of my friends who asked me to introduce nice movies to them despite they know the fact that I love and watch almost all the movies the cinema could offer. They were shocked and hesitated when I say â€œLeon Laiâ€™s movie called Moonlight in Tokyoâ€. I would say donâ€™t limit yourself, open up and try something new. You never knowâ€¦ you will never know if you never give them a chance.

Note:
Hahaha… guess what! I was shocked

, but in someway happy

when I accidently found out that Leon Lai actually has the same date of birth as mine. Muahaha…

. But hahaha.. but I will still stand by Andy Lau (betul kan jimbo?)

Night at the Museum