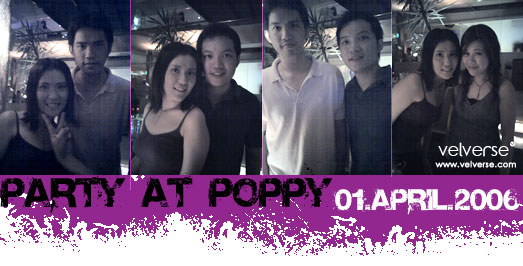 What is better than gathering with friends and POPPY on April Fool’s day. PARTY people! Wooohoo….

This time around.. we all decided to walk across the street from Rum Jungle and try to party at POPPY! And well… we… ermmm I think should be precise I never expect that much people to come join in. Not that it’s a lot of people.. but hey.. at least the people I hang out with often doesn’t really like to party… so yeah.. consider a lot to me.

Yeay…. me, gigi, brian and jon (obviously he is fashionably late that he’s not in the photo session) was suppose to go to Q-bar in the first place. We asked jon to go book for table since he is working in Sunway only to find out that it has been temporarily closed down. Which well leads us to party at POPPY since meng says that he will be there.

I was shocked that Oliver joined us for the party. I guess this is the first time ever… ever.. ever…. I party together with him. Yes.. same goes for Jon.. First time ever ever… ever. Hahaha….. but well…. everything has it’s first time.

Well.. it was quite and enjoyable nite.. minus out the “SUPER BAD SERVICE” from the front desk girls and “PR people who pretend not to see you” walking around. Yeah…if you by any chance believe you are an “INVISIBLE” person… you can try walking naked there. Yes…. only if you believe you are.

MY Birthday Lunch at Still Waters