2012 has come and gone in a blink of an eye.
and well… I have survived the Y2K and the predictions of the great Mayans, and what’s next?
Really, for once… I sat down and really think hard… what do I really want for 2013?

I guess, what I want this year would be… 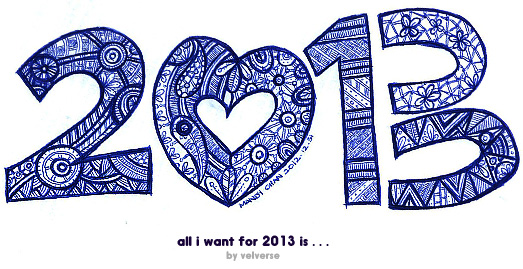 1. Try out more good food.
Awesome food in fact, and more seems to now be an understatement… is like loads and loads and loads of awesome food! Yes… think I gotta eat like there’s no tommorrow. I mean, seriously… I don’t know how many more Y2K or predections I could get away with

2. Travel… yes travel more!
Ooopss… I think I used the word more again. I mean, I can’t settle for a number although I have hit my quota last year. I really wish I could see the world a little more. Probably this time further away, I don’t know. But weirdly, my heart is thinking Hong Kong. Why? I seriously don’t know… probably I miss the gashapons, probably I just miss the food, probably I just miss those fun travelling moments. But yeah, then again… I’m also thinking of Taiwan… where I am seriously dying to try all the streetfood. I swear, this time round… I am just gonna eat from the beginning of the street till the very end.

3. Work hard, play even harder.
Now yes… almost everyone I know say I work too hard. Probably is a sarcastic remark, probably it’s true… but it’s just because I’m incompetent. I just don’t have the skills to do things as fast and good as the others, hence I would really need to spend a little bit more time on it, and step up the game as well. But well, nevertheless… I’m still finding ways to fix it… yes, serious fixing and overhauling!
But well, I’ve decided to play even harder to balance up my life. How exactly? I don’t know. I haven’t exactly figure out… probably by eating more good food, travel more? Yes.. pretty much covered on the above pointers.

4. An instagram a day, keeps the memory alive!
Yes… a small little side project I’m working on right now… to at least take a photo a day via instagram and at the end of the year, create a wall montage or mosiac out from all the instagram photos I’ve taken. Interesting? Well, I’ve up the level a little… no faces for sure. Yes… it’s just daily photos which represents the day of my life… probably some weird looking photos that doesn’t mean anything… but well… that’s the fun bit of it. And I really wonder, what will my wall looks like at the end of the day!

5. The arty side of me.
I’ve been slacking again. I know… right? It’s sad… but sometimes, it’s been difficult and bumpy road. But I’ll still hang on and not disappoint the fire and passion in me. And… at the end of the day, I really need to set my priorities right. The path I choose and the dream I dreamt about… it’s gotta start somewhere… and I guess it’s gotta start here. Draw mandy chan, draw! Draw and chase after the infinity canvas!

Flowers of the day #3

I know what you did last time