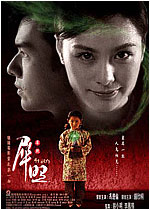 Another one of Stephen Fung and Gillian Chung movie collaboration after I first saw them both together in House of Fury. I personally think it  they both displayed really good on-screen chemistry as brother and sister, which is what that got me interested and looking forward to this new horror/thriller themed movie – 49 days.

Fitted to it’s poster theme, the movie opens with an opening title similar to the movie A Chinese Tall Story. It starts with a text intro, giving viewers an introduction to Chinese believes back in the olden days. One of them being – when someone burns a rhinoceros horn, it is said that they will be able to see ghost.

The story starts by telling a tale about Lau Sing ( Stephen Fung), a young Chinese herbalist tasked to expand his family business and set up a medicine shop in the provincial capital. Leaving behind his beloved wife and daughter back in his village, he promised that he would return to find them as soon as the business is settled down.

Four years passed by, Lau’s business is doing well and he decides to return to visit his family when he received a letter from his wife. On the night before returning to his village, Lau is seen entertaining with some businessman together with Susi- who long had a crush on Lau.

The movie then shifts to a scene where Susi witnessed a crime committed by Lau’s trusted friend/business partner – Pang Sei (Raymond Wong) where he is seen burning down the herb warehouse. Susi did not expose him as she wants to keep Lau by her side while Pang Sei eyes on Lau’s family fortune.

Framed and accused by Raymond for setting his herb warehouse on fire and killing everyone in it, Lau is sentenced to death and are scheduled to be beheaded in the public. Siu Chin is an attorney played by Gillian Chung, was sent to help Lau Sing but fell on coma for more than a month when she met with an accident.

On the day of execution, Lau Sing escapes with Siu Chin where they both head back to Lau’s hometown. Strange things starts to happen. Lau’s house appeared to be old, dirty and haunted looking. Lau saw a little girl sitting at the corner of the house alone, only to find out later she was his daughter.

Feeling terrified when she heard voices, Lau’s daughter ran to the brightly lighted room where she finally manage to see Lau. Story starts to unfold, where Lau finally knew he is a ghost himself as he was beheaded earlier and his daughter are only able to see him when she lit special candles – candles with grinded rhino horn added to it, something Lau would add as a prescription for his daughter’s breathing problems since young.

I thank the director for not including the cheap and abrupt pop-up horror scare scenes. The horror scenes are mild or close to none. While I like how the movie tells tale of an old Chinese believe, I think it tries too hard to cover many different emotions and relationship hence lack of consistency and messy storyline.

I have so many questions in my head from the messy storyline, and just to name a few:
Pang Sei was in serious debt with the loan sharks which resulted him to burn down the herb warehouse with the reason – to get money.
1. What money does he get by burning down the warehouse? Stocks are money, how by doing do gets him money especially in an immediate situation.
2. He is said to have bribed witness and officers. How? Especially when he is said to be in serious debt, and he burnt down the warehouse where all the stocks are.
3. He managed to poison the loan sharks. Which makes me wonder, if that can be done so easily this fiasco wouldn’t have happened. He wouldn’t have to gone through this much – burn down the warehouse, frame Lau, bribe witness and officers, cheat Lau and his family of their fortune and killed people.

I am still confused, but seeing Stephen Fung’s smile in the end manage to ease some pain.

Movie Review: Going By The Book