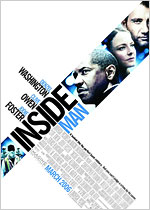 Clive Owen eh.. yeah.. He I must see. Hahaha.. I think he has a very powerful pair of eyes. Yeah… it’s a hard to explain thing but well.. yeah.. just look him in the eyes.

A very nicely done opening graphic. Well.. I am talking about how the titles and credits come about. It looks good and well sorta matches the whole theme thing. *bravo bravo.. clap clap clap* I personally like the asian touch to the opening theme. Yeah… believe it anot, they used a Bollywood song to be the theme of this movie. Oh yes… I was looking all around for the song. It is so nice.. I felt like dancing in the cinema.

Okay okay… the movie only have a simple concept behind it. The Perfect Robbery. Something so perfect you can’t do anything eventhough someone has robbed the bank. *let it go.. let it go… let it go* Yeah… no suspects, no witness and no evidence. Everything seems connected yet untraceable.

I find the coolest part of the movie is the starting of the movie where it is a zoom in shot on Clive Owen when he is saying “My name is Dalton Russell. Pay strict attention to what I say because I choose my words carefully and I never repeat myself.” WOoohooo….

The movie starts of with Dalton Russell (Clive Owen) and four other robbers walked in to the bank dressed up as a wall painters. I love the scene where they shot the van they came in… it was written there “Never leaves until the job is done”

Police detective Keith Frazier (Denzel Washington) is sent to nagotiate with Dalton. Well.. to his surprise, it is going to be a bad day for him as Dalton is a very smart individual that has everything planned to perfection. Matters got worst when Madeline White (Jodie Foster) is being sent by the Mayor to assist in the case. Well obviously she have a motive. She will have protect her clients interest that is in the safety box. She will have to make sure no one and nothing in the safety box is being touched or exposed.

I love how the director place the twist and turn around the show. The best part is how Dalton is so careful with his plans. I was rather disappointed with Jodie Foster’s character. I think she was being shadowed and well.. I think she din really shine that much in the movie. Well yeah, she surely have a cool look and sharp dialogue but hey, it was just disappointed.

Well… I believe some people were rather disturbed with how Spike Lee manage to slot in some racism scenes into the show. I very much enjoy how the movie twist and turn around but well… I guess I need to rewatch it again to get more details right. Love it. Especially the sharp dialogues.

The Fast and Furious: Tokyo Drift – So fast so furious that I got lost!