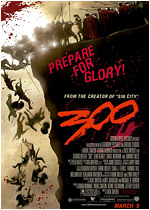 From the release of the trailer, I already fell in love with the movie. The monotone colour treatment, the editing just got my attention. I remember the last time I saw a movie of similar treatment was Sin City and Sky Captain and the World of Tomorrow. I couldn’t help but give the movie  two thumbs up 👍👍 and to keep the review short, it’s a combination of  Gladiator and Sin City.  And if you are like me who like both, you will agree that this is a great movie and shouldn’t be missed.

The movie, 300 is an adaptation from Frank Miller’s (creator of Sin City) graphical novel with the same title and was inspired and loosely based on a famous historical event, “Battle of Thermopylae” in which some critics claimed for it to be 90% accurate to the true events.  The movie is narrated from the perspective of a Spartan soldier, Dilios (David Wenham) on how King Leonidas (Gerard Butler) and his 300 men fight against the Persian King, Xerxes (Rodrigo Santoro).

300 starts of by introducing Sparta as a military state in Greece where military fitness practically begins at birth. Shortly after birth, the babies were put to a test and were then brought to the elders in which if the baby were found weak, they will be left to die at the slope of Mount Taygetos. They were then trained to be a Spartan soldier – to fight and never retreat, and having a shield of their own is their ultimate goal. Their final training was when they are sent to the countryside with nothing and forced to survive with only their skills and young Leonidas survived the test.

The movie starts to get exciting when Leonid who is now the King of Sparta who refuses to submit to King of Persia, Xerxes (Rodrigo Santoro). While being bribed and only care for his own interest, Theron (Dominic West) is totally against Leonidas idea and object to the idea of going on a war against Persia.

As a king, Leonidas can’t obey the Oracle’s (Kelly Craig) advice as no one is above the law. Enlighted by his wife, Gorgo’s (Lena Headey) advice, Leonidas gather 300 of his best man where he only selected men who have sired sons who are old enough to take over the family’s responsibility. When stopped by the elders, Leonidas simply say he is going for a walk with his 300 personal bodyguard.

Before Leonidas leave, Gorgo asked Leonidas to return with his shield in glory. For many, seems to meant Gorgo gave her blessing to Leonidas. However based on true Spartan customs, if a soldier were to return to Sparta alive without his shield, it is assumed they threw the heavy shield to run away from enemy and that retreat act is punishable by death or banishment.

As Leonidas and his men march to the Hot Gates, they met up with a group or Arcadians who joined forces to battle the Persian.  Upon arriving, Leonidas saw many Persian ship sank due to bad weather but were quickly shocked when they saw the amount of Persian soldiers at the shore. While busy preparing for the battle, a hunchback Spartan, Ephialtes (Andrew Tiernan) who secretly followed Leonidas tries to offer his valuable help to the Spartans to redeemed his father’s name in the battle but was quickly turned down when he fails to lift up the shield as Ephialtes are one of the Spartans that were left to die at the mountains due to weak body.

Constantly defeated by Leonidas, Xerxes resorts to lure Ephialtes to spill out secrets on how to defeat Leonidas.  Being betrayed, the Arcadians soon retreat while the Spartans continue to battle till the very end. While not able to win, Leonidas manage to cut Xerxes’ cheek delivering his promise “to make God King bleed”.

As mentioned at the start, I am totally in love 💗 with the colour correction and monotone feel, leaving users to focus on the character and the story itself. Also find the choice for casting is appropriate and by far one of the best movie seen this year.

An action packed movie with loads of blood and fighting scene. Watch it, and don’t miss it!