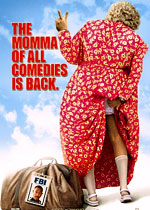 The big momma is back! Well, each time you hear the word “it’s back”, we always associate it with “it’s bigger, it’s better” but consider this not up to the expectations of it being bigger, better and bolder. Well, yes spot on! *spoiler alert* Be prepared as what I was about to say is not fully beautiful words.

Okay, a countinuation from the first movie, Malcom got married and settle down for a FBI desk job. Yeah, easy life, safe and yeah.. SAFE. Everything was about to change when he found out his once upon a time partner got murdered. The police force is trying to sneak a undercover nanny to the suspect’s house to gather more information.

*blink blink* Malcom sees this as an opportunity and what is better than big momma in the house. He easily swept other candidates off the interview and secure the job. Big Momma soon realise that it’s more than just a case when there are family problems, household chores and addition to it when he needs to take care of everyone’s emotions.

Everyone in the house have weird attitudes. Tom Fuller (suspect) is ever busy with work and has no time for the family, Leah Fuller (wife) ermm.. well she doesn’t seems busy with work but hey I dunno where she has gone to most of the time, Molly (eldest daughter) is in the “mid teens confusion” mode, Carrie (second child) always longs for her parents attention thus she joins the cheerleader, Andrew (youngest child) never actually talks and well… he sorta like to jump from tall places.

The classic part of the movie was when Big Momma is wearing this yellow swimsuit running at the beach. Yeah! hahaha… CLASSIC I tell you. Big Momma was suppose to catch this hacker who is responsible in creating this worm which he is gonna sell to Fuller. However, Big Momma blew his cover, the hacker jump from the jetty and landed on the boat. *spoiler* What happened here? I almost stand up and ask them for a refund. Nothing was being showed or mentioned later on. I mean.. okay… he jump, hit his body on the boat and then fainted and then *blink blink* I am being left at the movie hanging? Is there some problem with the editing or is it just a bad plot?

When the police figured that Fuller might have merge the programs and is getting ready to sell it, they decided to find help from Stewart. Big Momma was shocked to find out that eventually Stewart is a 12 year old kid. In the midst of hacking into the system, Molly called for help. Big Momma rush over to help only to find out the truth about the whole case which apperently tells that Tom Fuller was innocent.

Conclusion, it’s a comedy so yeah, be prepared to laugh. By just watching the first 30 minutes of the show, I can safely say that the first episode is far better than this episode. I think in this show, they try to bring in far too much emotion and care for everyone. It’s not a bad thing but just, comedy and emotions just don’t work hand in hand. I understand that shift of piorities are needed. But hey, it sorta dilutes the laughter part, tones down lots of things. I dunno… just not as good as I hope it would be.