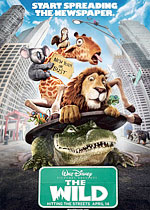 The cinema market is now being flooded with 3D animations and well.. my friend pointed the fact to me that the current trend in 3D is animals. Which I find it quite true… most of the up and coming 3D has animal characters in it as well. Probably it is something easier to do? I dunno.. I am not a pro animator.. so who am I to judge. I am just some lazy ass.. who buy a bottle of mineral water.. stuck my butt to a numbered sit then shake some legs and watch whatever movie that is being shown.

As remembered, I tot I saw a photocopy of Madagascar. It’s true… everything is so alike… animals… zoo.. the hype about the wild… I mean.. well.. and it is almost a back to back thing. I dunno can’t blame me for confusing.

The story tells about Samson, the great and mighty king of the zoo. Everyday, people come to see Samson the great and would be glad if they could hear Samson roar. Samson’s son, Ryan on the other side is always fascinated by Samson’s stories about the wild. As curious as he is about the wild, he very much respect his father’s talent to roar because he can’t roar for good. The worst part, everyone is laughing at him because he seems to be meow-ing rather than roaring.

One day, being sad after he screw up his father’s game, he decided to find some place to sit down and think.. Yeah… some place his dad always forbid him from going near to. The green box. The next thing Ryan knows, he was being locked up in the green box and is transported to some far place. Samson and his friends is all set to rescue his son. They all then have this rescue mission to save Ryan.

On the way to save Ryan, they go through lots of obsticles which includes being chased and nearly bitten by some stray dogs. Hahaha.. yeah one could imagine… how a lion is so afraid of stray dogs? Yeah… that really did happen. To run away from the stray dogs, they use the underground tunnels which they end up seeing two alligators. Fear till death.. they tot they would spell F.O.O.D to the alligator. However the two alligator is cool enough to show them the way to the Statue of Liberty. Oh yeah.. forget to mention how I love the way the koala pretend to be the Statue of Liberty.

Samson and his gang is a little late when they saw Ryan being transported to a boat. Samson and his gang faster jump on to a small boat and goes after Ryan.. which they all end up in an island. Yeap… the green box is actually used to transport the animals from the island to the zoo due to some volcano erruption problem. Being scared till death.. Ryan just ran in to the jungle.

Samson is all set to save Ryan when misfortunes keep happening which leads to know Samson’s biggest secret.

A story which I think combined The Lion King and Madagascar to me does not do the trick. I find the animation details were less noticibl. And I just think it wasn’t funny or tickle enough to make me smile. I think it was rather boring… okay.. maybe I was too busy comparing it with Madagascar.

But no… even the plot itself seems to be a little too shallow and seems like everything has been fast forwarded. The rescue mission in the New York town seems fast… it’s like… blink blink.. there you are.

Well.. maybe I sorta have high hope for uncle disney.. but well… it’s okay.. people do fail once a while.

Food at Paddington House of Pancakes