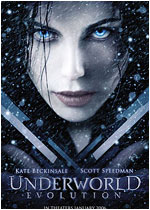 I could never imagine the lead actress in Pearl Harbour is currently a vampire. I know, it’s plain my problem but I just can’t help it. Put the pictures side by side and I must agree that she looks so yummy now. Those blue eyes were just so perfect. It got me so into her. Opss.. did I spill some secrets out?

Okay… I might be talking rubbish here as I din actually saw the first episode. Well… for my age, I might even forget what I have seen even if I have seen the movie before.

What can you get when you put two clans that just love the taste of human’s blood. Both were eagerly fighting and killing loads of humans. The movie started with scenes where Viktor the leader of the vamps wants William locked up for all eternity, Marcus (William’s vampire brother) is against it but goes with it for the sake of being at peace with Viktor.

A few thousand years later, Marcus finally got freed and knew about all the drama’s that happens and decided to free his brother in order to create a new race of half vampires half werewolves. He is then in search for Selena and his boyfriend because they hold the key. Yeah the key to release his brother. Well.. there are loads of fights, blood pouring here and there and of course sex scenes which were deleted from the cinema. But hey, they din censor the “fuck” word.

Well, there are much details which weren’t explained clearly.. or perhaps because I miss the first one thus I am so blur. But well… I could never understand how the know-it-all-marcus fails to see that selena’s boyfriend is a mix breed of warewolf and vampires. If he was being killed by Marcus, why the hassle of Marcus trying to release his brother and create some new breed?

Well… overall, I would say they do spend a quality amount of time in doing the CGI for the movie. However I just felt something was overly done. I dunno just a strange feeling. I like the effects they did on Marcus big bat wings. Which makes me wonder.. How come other vampires in the movie doesn’t have wings? And well, if Corvinus is the first immortal, how can he be killed by Marcus so easily? And so.. when Selena drank his blood… she is now an immortal vampire?

I dunno… I personally enjoyed the movie despite all the questions surrounding me. Well, it’s a fast and violent movie. And obviously I din have that much time to think that much question when I was watching the movie. I guess I can say it’s a after-movie taste. Hahaha… well, I guess you will enjoy the movie if you enjoy catwoman.

Hahaha.. stop being so bias. Both the ladies wore black lather suit and jump around and all. If you like this movie but not underworld, there is only one reason to it. You know it, I knew it.