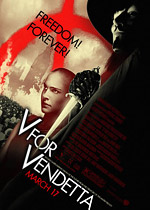 v for velverse~~ v for velverse~~ v for velverse~~opss.. I just can’t control myself each time I see the trailer and well I surely kenot control myself 5 minutes before the show starts. I was over excited. I dunno why. I heard the movie was good. I saw the trailer. It got me going. Yeah… v for velverse… also motivates me to go watch it. Well practically, I can’t find a reason not to watch it since I like matrix that much and this movie is from the creators of the matrix. What is best is what it constantly says “People should not be afraid of their governments. Governments should be afraid of their people.” The opening of the movie immediately catch my attention. I love how the camera angles and the mood set in v’s dressing table. It was so dramatic. It is even matched with this “voice of england’s” dramatic speech and talks. But well.. nothing match this line.

Evey Hammond: Who–who are you?
V: Who? Who is but the form following the function of what… and what I am is a man in a mask.
Evey Hammond: I can see that.
V: Of course you can. I’m not questioning your powers of observation, I’m merely remarking on the paradox of asking a masked man who he is.

V: VoilÃ ! In view, a humble vaudevillian veteran, cast vicariously as both victim and villain by the vicissitudes of Fate. This visage, no mere veneer of vanity, is it vestige of the vox populi, now vacant, vanished, as the once vital voice of the verisimilitude now venerates what they once vilified. However, this valorous visitation of a by-gone vexation, stands vivified, and has vowed to vanquish these venal and virulent vermin vanguarding vice and vouchsafing the violently vicious and voracious violation of volition. The only verdict is vengeance; a vendetta, held as a votive, not in vain, for the value and veracity of such shall one day vindicate the vigilant and the virtuous. Verily, this vichyssoise of verbiage veers most verbose vis-Ã -vis an introduction, and so it is my very good honor to meet you and you may call me V.

I dunno about you but hey, this is the first time I have heard so many “v” word in my entire life. Yeah man… I mean… it’s easy to make the “f” sentence like… Fook found a fine farm at fairyland.

*see… i am talented after all*

I love how this movie was being shot and the concept behind the whole movie. It has it upbeat moments when V saved Evey and bring her to listen to an ochestra. Yeah. V actually blew up the whole St. Mary and then interupted the tv station to broadcast a speech to remind the people that they should not be afraid of the government and follow blindly as they say. Yes.. yes… Remember, remember.. the 5th of November (which was stated wrongly in the BM translations.. they stated 15th).

Evey who coincidently work at the TV station saved V from being attacked from the back. Having no choice, V saved Evey and brought her home. V couldn’t allow Evey to leave the house because it is a high risk for V as the government is looking for them.

The movie then followed by a lot of series of murder. Yeah… all done by V. Yes… one must know why eh.. well, it was being explained in the movie. THe movie got a little bit slow down when Evey manage to ran away and landed at his boss’s house. Apperently, his boss was also one of those who is against the High Chancellor.

Evey’s boss house got busted when her boss made a controversial comedy on the TV. Evey was apperently captured and was thrown in to a lockup. There she found a small piece of paper. Yeah.. and autobiography of a women.

She soon realise how important it is to stay strong and understands what V is trying to do.

The ending part was cool. Especially when V put the decision to bomb the parliment to Evey while V went on looking for the Chancellor. The words he say was superb. I can never forget.

V: Beneath this mask there is more than flesh. There is an idea, Mr. Creedy, and ideas are bulletproof.

I actually cannot believe it is such a wonderful movie. It is a 2 and 1/2 hours movie but yet it seems so short. I dun find it boring.. and best of all.. there remains some mystery in the movie. It’s like I can be 80% sure of who V is base on the nitty gritty details from the movie.. but I can never confirm kind of thing. I like it. Just like how matrix is.. It’s an open end movie. It’s up to everyone to decide and believe.

Snakes On A Plane

Movie Review: My Girl & I