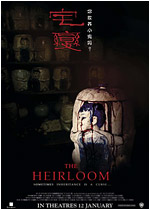 The story started with James (an architect), a distant relative of the Yang family who just came back from overseas to inherit an old house. Being an architect, he loves the house condition as it has a great gothic taste to the old building. James was hoping Yo (his girlfriend) would move in and get married with him. However things turn rather sour when Yo says she wants to go overseas and continue her studies.

But out of a sudden, Yo turn up at James house and told him that she will be staying in Taipei and continue doing some dance shows.

Okay… ditch those, erm… James friends then turn up at his house to celebrate. Weird things soon happen. Both James friend kept coming or in precise words sneaking into the house. The best part, no one actually knows how they come into the house.

Bad things start to happen when James friend died in a hotel far from Taipei. It creates lots of curiosity and a detective decided to investigate. And just as he starts to get closer to the case, he himself died in a tragic manner. Yeah… he knew he is going to sneak into the house by 12am, so he decided not to fall asleep. And for safety reasons, he even handcuff his hands to the bed frame. However that didn’t work. He tore his hands and somehow ended dead at the Yang’s house.

Yo’s best friend finally knew the cause of what happen and enlighted Yo. Yo soon find out that the Yang family was cursed. The Yang family’s fortune comes from raising “child ghost” (dead babies fed on blood and refused the opportunity to reincarnate). Raising child ghosts may bring great fortune, but at the same time great doom. As time pass by, most of the Yang family children was being born with problems.

James mother used to be the treasured one since she was born healthy. Her twin sister however was being locked in the attic because she is sick and has cancer. Fate starts to change after she gives brith to James. She fall very sick but her twin sister in the opposite feels better. They both swap place and soon James’s mother was being locked. Her anger then makes her set and commanded the “child ghost” to kill the whold family. Everyone in the family was hang till death at the exect same height and same time.

*spoiler alert* The ending was rather confusing. It is said that James actually knew what happen from the start and that he was wrong to set her mother free. I dun really get what the ending means as he is suppose to be carrying his girlfriend Yo, but it suddenly turn out that he is carrying is mother. I have no idea what is going on. Everything happen because of the “child ghost” or James’s mother? And if inheritence is a curse, what curse is that? I dun get it. What will happen if Yo remains pregnant?

I think this first taiwan horror movie tries to hard to have the Wong Kar Wai feel. Too much artistic values are tried to be placed in to the movie. However the non consistent script and untold story makes people confuse and to make matter worst, they try to make an open ended movie when there isn’t much substance in the middle to support it.

Worst of all, no one could tell why death only surrounds certain people in the movie. I just think everything would be so much better if they could just not try so hard to impress because they are the first to do such stuffs in Taiwan. But I must say again… the poster is seriously cool! The weird part, none of the wallpapers or the mainpage of the website features the same element.

Movie Review: Deliver Us From Evil

Re-Cycle: Not everything can be recycled