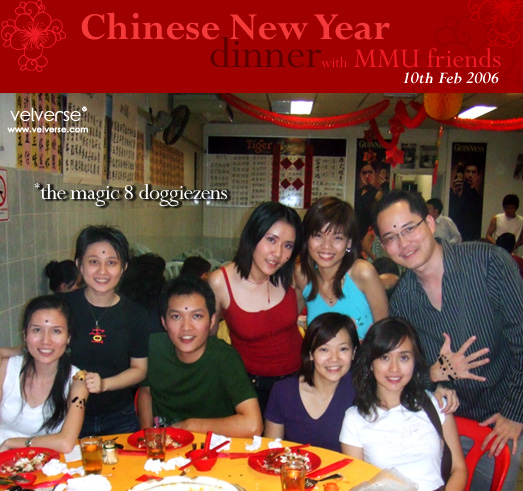 Yeay…. It’s what I call the time of the year to gather around. Everyone get together, have a nice dinner.. chit chat… eat…. gossip… eat…. chit chat again…. gossip again… and eat again. Ah… I just love it. Can’t blame me. I’m a typical girl after all.

We decided to head for something more special this year. Yeah previous years, we have it a very formal way. The ermm dine at some expensive place… with those ermm 9 or 8 course set meal. Everyone eat very politely kinda thing… So yeah.. this year a change of venue and well type of food we eat. Yeah.. I guess the dogs are hungry for seafood. 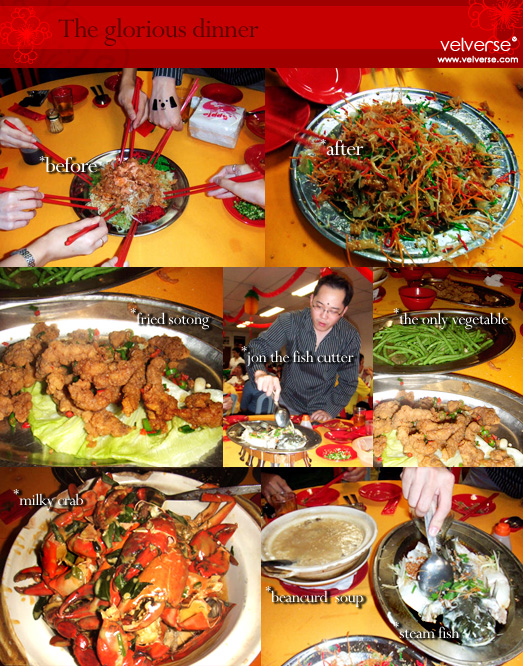 There were so many food. Not as much as previous years but hey… all the food taste just superb. Nothing was left behind. Well, as part of the chinese tradition which we did not forget… the Yu Sang. Oh yeah baby! One of my favourites. Everyone gets ready to toss it around. *phew… it looks like a tornedo has just pass by*

I must say I enjoy the crab and the beancurd soup the most. Hahaha…. I think I would surely go back for second round next time. Well.. dun ask me where it is. I only know it is located somewhere near Dataran Prima. *yeah yeah… me no good… me no good.* Who can blame me when I am being blinded by all the good food.

It’s lucky that the food came out quite fast. Not much time is wasted in waiting for the food to be served. Everyone is busy eating and munching. Yeah… good food must be eaten hot. 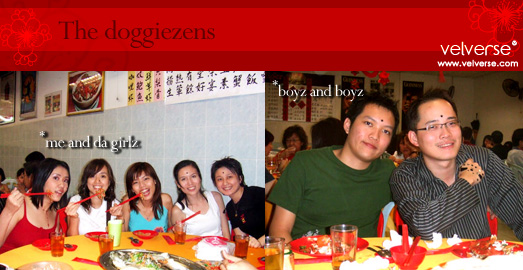 Oh yeah… by the way… I forgot to mention who did came to the doggie-styler gathering. Eventually there were suppose to be more people but as usual… many of them just have last minute things to do. So the only people who manage to come… Jane, Jessy, Jon, Brian, Emily, Eunice, Shirley and me. *million thanks to make the effort to come.* 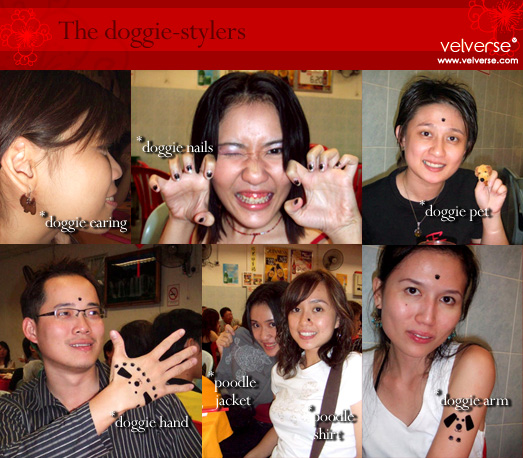 Well… I am glad that people who turn up, just din turn up like any normal people would. Yeah… Everyone must be fashionable once in a while. Especially following the ocassion and theme. Well… it’s the doggie year so everyone gotta have some dog element with them when they turn up. So yeah.. Lucky no one did disappoint anyone. Shirley wore her cute cute doggie earing. As for me… Eunice borrow me a cute grey poodle jacket. I manage to have cute paw nails at the end of the day too. *ah… that’s the doggie style man!*

Jessy brings a small magnet doggie. Eunice wore a white poodle blouse. *hemm… I somehow suspect the jacket and the blouse is a perfect match* Jon brought lots of doggie stickers. Yeah something he did for his company. So yeah, those who din bring anything would have to stick stickers on their face. But hey… as a custom or tradition, everyone that arrive have to stick one on their face.

Emily turn up late for the night. Yeah.. the time we almost finish our dinner. *sigh* So Jon decided to test Emily where is everyone’s doggie located. Yeah.. since she din wear anything related to the theme. Emily couldn’t guess where Shirley’s doggie is located. The punishment… a sticker stick to her face each time she answer correctly. What is most shocking… even with massive tips.. she still can’t get it. The worst part… She went and look eye to eye with Shirley and she still couldn’t spot it. Hahaha.. when they finally guess it, their turn to guess where my doggie is located.

Jon as forgetful as ever also forgot. Thus… it’s Emily’s time to seek revenge. Yeah… need I say how many tries Jon and Emily guessed? I think you can see it from the pictures

Before we left…. I suddenly got this idea of doing this doggie nails. Yeah.. since Jon have loads of sticker left behind. So I decided to waste some and plan to put those cute paw stickers on my nails. Emily think it’s a great idea and decided to help out. Not bad at all…. it looks like I have gone for some manicure. 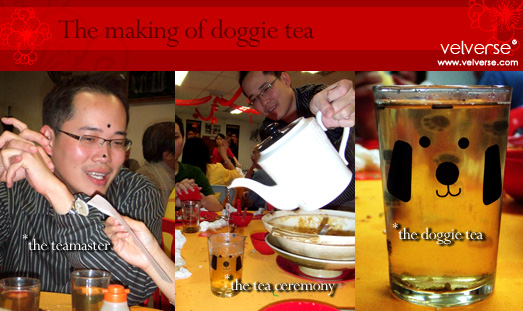 Before everyone left, Jane give everyone of us a double ang pau. Yeay… hahaha…. we are richer by the end of the day. Thanks Jane *muacks* Everyone of us went back feeling happy and full… not to mention richer

Movie Review: My Girl & I

Birthday Brunch With My Girls