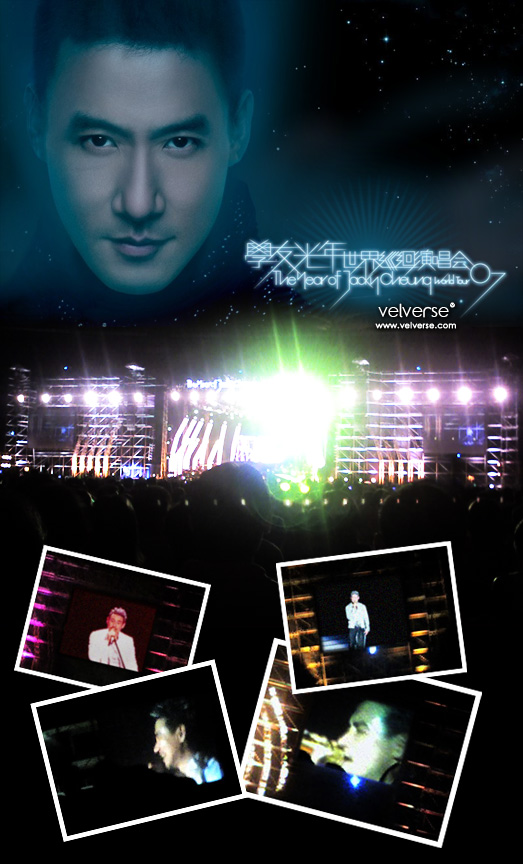 Okay… I went to Jacky Cheung’s concert last 2 week ago. I wasn’t really a huge fans. Not as much as I like Andy Lau. So yes, do not expect an as detailed review from me. And no, I don’t dislike Jacky… just I love Andy way more.

It was my first time going to Jacky Cheung’s concert. And sad to say, I reach just in time for the concert to start. If I haven’t run like a crazy woman… I think I would have missed the opening of “The Year of Jacky Cheung World Tour 2007” concert.

Jacky kicked off his concert with his famous Ngoi Foh Fah/çˆ±ç«èŠ± (loosely translated as Love Fireworks) A really good choice to open the concert with some fast beat song. Yes, I still remember the gold colour tuxedo he is wearing. Lovely~ He then continue on with a few numbers of songs which I think I have never heard of before (yes, I really gotta admit, I ain’t a hardcore fan). I could remember a scene in the concert whereby two rocket like fireworks hit on the stage and then Jacky continue to sing his song. Aw… I really think that scene is really really awesome!

Righter after that, Jacky changed into a new outfit and started to interact with the audience. He started to tell story about himself. Singing a song after each short description about his life. It’s really funny how he talks about himself. How his family have more female members. Well of course, he stays with his mum, grandma and aunties while his dad and brother is a sailor. Which explains how he only notice he is a boy when he is 3 years old (when his dad came back for a short break).

He then sang a song he wrote for his elder daughter. Yup, he promised to write and sing a song for a daughter… which was delayed for 4 years. Yeah… Yao Yao/æ‘‡æ‘‡ (loosely translated as Swing) is really a lovelyÂ song. Jacky jokingly said, if one have sleeping problem… this song is the best remedy. Play it for 4 – 5 times and one will surely fall soundly asleep.

Jacky claims that he knows woman very well… now that he have grown up with many. Even now… he is staying with his wife and 2 daughters. Talk about woman’s luck! He jokingly mentioned that he knows how dangerous it is to write a song for the daughter and not write one for the wife. So, right after producing that song, he quickly write a song for his wife. Gong Nei Ji/è®²ä½ çŸ¥ (loosely translated as Tell You). I really like this song. It is really catchy and romantic. I think it’s the second time I heard this song and I can really say… the melody sticks to my head.

He also sing a song, GeiÂ Peng You/ç»™æœ‹å‹ (loosely translated as For Friends)Â to remember the year 2003… whereby many artist passed away. He hasn’t exactly wrote any song for his youngest daughter. He say he will write one for her when she requested it inÂ  like 3 years time. So, he picked Zai Ni Shen Bian/åœ¨ä½ èº«è¾¹ (loosely translated as By Your Side) as a temporary song dedicated to her youngest daughter until he composes one.

Right after that… Jacky jump in to the next segment of the concert. The part where he will sing some song from other artist and then continue on with the best of Jacky Cheung’s collection. I think he really did well performing Emil Chau’s Ming Tian Wo Yao Jia Gei Ni Le/æ˜Žå¤©æˆ‘è¦å«ç»™ä½ äº† (loosely translated as I Will Marry You Tomorrow)Â , Stephanie Sun’s Tian Hei Hei/å¤©é»‘é»‘ (loosely translated as The Sky Is Dark)Â and Jeff Chang’s Ai Ru Chao Sui/çˆ±å¦‚æ½®æ°´ (loosely translated as Love Is Like A Tide).

Jacky then introduce the cast members and gives his ending bow. The crowd wants more and cheered for more. The view of the energetic crowd is simply superb. When suddenly you heard a loud heartbeat sound… the lighting on the stage started to react.

I personally think Jacky is really the leader in terms of his singing ability among the “Four Heavenly Kings” (yes, much better than Andy Lau). He really sings well, and this make his 3 hours 15 mins concert very worthwhile despite the fact that I think his stage was rather simple. How do I exactly know it is more than 3 hours? Jacky change his cloths every 30 – 35 mins. So yes, he changed 6 pairs of cloths 🙂

On the other hand, I really don’t think he fully utilize his stage. There were stairs on his stage. He didn’t really go much to the top and I don’t really understand why. Coz people like me who sit rather back can hardly see him. He only appear on the top for 3 times. Once during the opening, once during the theater segment and once during his last song. He spentÂ more time going to the right wing of his stage compare to the left side. Which of course I couldn’t complain much… coz my seatings is on the right. YIPPIE~

I love how he intro his crew members, backup singers, band members to everyone. I really love it. He really make sure the audience know everyone of them. I like how me appreciate their effort and hard work. One can really feel it.

Then again, I left the stadium a happy audience coz he sang both my favourite song. The hope of him singing Wo Zhen De Shou Sang Le and Xin Ru Dao Ge is what make me go watch his concert. And yes!!!! He did perform both the song. Although he started to lost his voice a little after his theater segment… I still think he did a great job. Go JACKY!! Go JACKY!!

p/s – My pictures didn’t really do justice to the concert or his performance. What to do… it’s a rainy day andd I am not ready to sacrifice my camera. Hence I left my camera at home andÂ  snap all this picture with my camera phone. Then again, concert is always best experience LIVE.