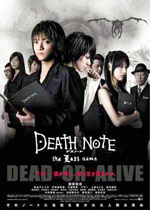 I still remember the first time I saw the first Death Note trailer which noted it was the year’s best movie.. currently a big hit in Hong Kong… highest grossing movie and I told myself it is just some normal and standard gimmic to get people going. When I saw the first installment… I was totally blown away. I am then a Death Note fans.

For the first time, I have no complaints with the acting. I like watching Japanese movies but at times the acting was kinda weak and loads of over-acting scenes. This is the very first time I am anticipating so badly for the second installment of a Japanese movie to show.

Being someone who loves watching movie, I just gotta warn anyone out there.. if you haven’t see the first installment of the movie.. please grab and watch the first part before watching this one. The movie started of where the first part ended. No kidding.. there isn’t any brief summary or any form of montages which tells tales of the previous movie. They however manager to insert some quick flick of the Death Note rules. When I say quick flick… I seriously mean it. That practically means one have not much time and probably no time to finish reading what’s on the screen. (Click here to read review of the first movie)

As mentioned, Death Note: The Last Name started of by picking up what is left behind in the first installment. This is when Misa Amane (Erika Toda) found the second Death Note right next to the dead body of the person who tries to kill her. Upon touching the Death Note, she is now connected and can see Rem (a female Shinigami). It was explained that Jealous (another Shinigami) always keeps and eye for Misa and as time goes by, Jealous grew fond of Misa. Jealous is all out to protect Misa at any cost. When the man tries to kill Misa, Jealous have no choice but to write his name in his Death Note and this action turned Jealous to dust.

Right.. a Shinigami’s duty is to take other’s life but not help pro-long others life. If that action is done, the Shinigami will turn to dust. Rem who always watch Jealous looking over Misa felt that she have now takes over Jealous interest and look after Misa. Hence, she finds it right to pass Jealous’s Death Note to Misa.

On the other hand, L (Ken’ichi Matsuyama) and his fellow team member attended Light’s girlfriend, Shiori Kashino (Yu Kashii) funeral. Although everyone else just think L is being cruel and unsensible, L still strongly believes that Light is Kira. Failed to prove his theory, L agrees to let Light join force with him trying and hoping Light makes a mistake and so he could catch him.

Upon knowing how the Death Note works, Misa is all set to find Kira/Light (Tatsuya Fujiwara). She then send a tape to the television station she is working at.. claiming she is taking everyone in the station as hostage until Kira goes and meet her. At the Sakura festival life broadcast, she openly goes on a killing-spree. People who criticize Kira were all killed. Claiming herself as Kira II and wanted to team up with Kira to build a better world… this matter make L more worried. What is worst is when L guessed that Misa can actually just kill someone by looking at their face (unlike Light who needed to know one’s name since he turned down the “Eye of a Shinigami” offer).

Light quickly head over to the tv station when he knows his sister and father was there and he was quickly spotted by Misa. Misa then quickly reveal herself to Light and promise she will listen to whatever Light says as long as Light agree to make her his girlfriend.

Knowing how serious matters would be if Kira and Kira II teamed up, L follows Light to everywhere wearing a cute looking mask. Coincidently, Misa drop by to visit Light. Light then introduced L to Misa (hoping that she could get his name). L sensed something fishy going on and quickly pick-pocket Misa’s phone when she is being surrounded by other students. As suspected, Light immediately calls Misa right after he sees her off. Light was totally shocked when he hears Misa’s ringtone.

Misa was then captured and locked up for investigation. Misa then gave up her Death Note (once a person give up their Death Note, they will not remember anything about the Death Note until they touch a Death Note again) in order to protect Light. Rem then went up to Light and asked him to safe Misa. Rem warned Light to not try to fool her as she will protect Misa at any cost.

The plan soon start. Light ordered Rem to drop Misa’s Death Note to Kiyomi Takada (Nana Katse) someone in the TV station that Misa recommends. Light on the other hand hide his Death Note and then asked L to lock him up as well to prove his innocence. As planned Kiyomi soon gets obsessed over the Death Note and start killing people whom she felt is not worthy of living. While in the cell, Light gave up his Death Note as well. L manages to notice the difference in personality in Misa and Light but couldn’t prove anything. He was then forced to set them both free.

As L is at the corner of the investigation not knowing where to head, Light quickly jumps in and help L with the case. He manages to find leads to the case which soon lead them all to Kiyomi. The whole team spied and focus on Kiyomi and finally they all know what is actually is going on when they manage to lure Kiyomi to killed someone. Everyone of them then touch the Death Note and saw Rem. They finally know Kira kills. When everyone including Light touch the Death Note, they all saw Rem… how ever for Light, his past memories about the Death Note re-surfaced. He then secretly took out a piece of Death Note and wrote Kiyomi’s name on it.

Upon knowing how the killing was done, Misa was released. Light then asked Misa to read a letter he wrote before he give up his Death Note and asked Misa to go find his Death Note that he hide. When she touches the Death Note, she remembered everything again. Light then told Misa to write down L’s name on the Death Note to finish him off. Surprisingly… Misa forgot what L’s name was as she see so many names everyday. In a desperate mode, she asked Ryuuk to grant her “Eyes of Shinigami” which of course will cost her half her remaining life-span.

After further investigating, L finds out that one of the Death Note rule not working as what he thinks is and started to suspect it is a fake rule. He is being suspicious about Misa and asked Soichiro Yagami (Takeshi Kaga) to bring the Death Note away. As L invites Misa over and tries to prove she is Kira II, Rem starts to worry. She soon know she has fallen in to Light’s trap as Light already know Rem would risk her life to save Misa.

Rem then wrote down Watari and L’s name on her death note to protect Misa. When L died from heart attack and pulled Light’s leg, Light was laughing with an evil grin as he admits that he is Kira. He then plans to kill his father as well giving description of his death in order to get his Death Note back.

Light was in great shock as his father didn’t die as planned. And what is even better, he didn’t bring back the Death Note. Light was stonned as he knows it is not possible. Everything that is being written int he Death Note will happen. L then walks out with his whole team member surrounding Light and Misa.

L then reveals to Light that Misa’s Death Note have been swapped when she least notice it. Which means whatever Light wrote in… was just to a piece of blank paper. And why L didn’t die? He actually wrote his name in Light’s Death Note that he would die 23 days later while he was seating down eating chocolate. Hence, whatever Rem writes in the Death Note later on does not take effect. Knowing and seeing Light in a great defeat, Ryuuk then write down “the last name”.

Although lots of people think the first one was way better than this one, I would say it very much different. I think the first movie was very much exciting as it is the first time movie of death god and it seems like a new and different type of genre. Hence everyone got so excited over it. I think this was as good as the first as it focus more on character development and emotions. Not to mention the more comlex issue about the Death Note and the relationships between the Death Note holder and the Shinigami’s.

What is even much better is L is the main character here which means I get to see more of him… which is the best thing ever! Of course I am a little disappointed as he is talking faster than he used to be which makes him less L than in the first movie. I think the CG’s of the Shinigami’s were great as they mimic the looks of the original Shinigami from the manga to the dot.

Of course the ending was somewhat different… but somewhat same. I think it is a good twist. They manage to change the plot yet stay original. Hahaha… however I was pretty upset as they ended the movie without giving it a room for the third movie which would actually show the battle of wits between Light with Mello and Near. But yeah, I love it… no matter what.

Cars: the cars speaks for themselves.