Mmm… if I was born rich, probably this would be one of my toy. Why? Cause I have the same thought and idea as the designer and founder of Fuseproject, Yves Béhar. Yes, to me a phone should be as simple as it used to be… and I believe many people has actually forgotten the very fundamental usage of a phone – calling and texting. 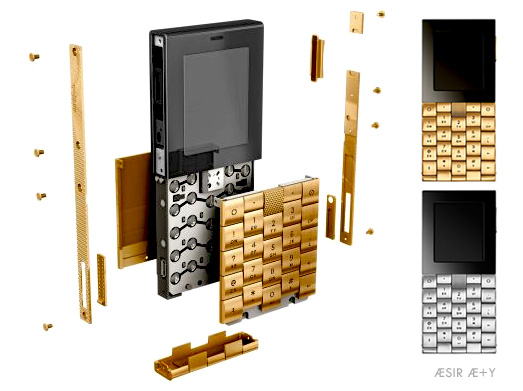 I really love how they induce the watch concept to the phone. Yes, I totally love the watch-belt like keypad design. Ah… simply awesome which I seriously drool for. They also included many watchmaking techniques in creating the whole phone, which would make the phone last as long as possible 10 to 20 years, just like how our watches are!

The Æsir Æ+Y phone took 3 years for them to design, partnered with craftsmen in Switzerland, France, and the Netherlands, and everything of the phone has been design specially for it. And you really know things are really crafted, when you found 38 custom made miniature screw to assemble the phone together.

Ahhhh…. I really love the 18K Gold version, which would cost me roughly RM130K. Wooohoo… I wish I can own one of this someday, and I will seriously let go of any smartphone anytime just for this. It’s really so pretty, so mesmerizing!  😀

Say Hello and Goodbye to Evan~

How can I forget?